(There was dancing at the congress dinner. That’s an unwritten ISAE rule and something I fully support. But it left less time for writing, so this morning I will present a shorter reflection rather than a full resume of the 3rd conference day)

This post is not about how applied ethologists differ depending on where they come from or where they work. They don’t, actually, or at least not much, not in a significant way that I have been able to observe during my 25 years as an ISAE member. The kind of work they do may differ, because that’s in part determined by the local context in which they work. Some aspects of animal use differ indeed very little: laboratory animals are housed and used in similar ways across the world and lameness scoring is unfortunately needed for dairy cows most everywhere. But sometimes differences are huge because the way certain practices work is so different.

Yesterday presented two examples from the area of animal production. The photo below shows Victor Abreu de Lima from São Paulo, Brasil and his poster on broiler catchers and their attitudes to animal welfare.

Catching broilers at the farm to ship them for slaughter used to be something you got anybody who needed to earn some extra money in to do. When I was a teenager, this was something a local football team could get money for a training camp doing. Obviously, having teenagers who know nothing about chickens and who just want to get out of the dark smelly dusty chicken house as quickly as possible isn’t great for animal welfare, This is at least one of the drivers for replacing manual catching with automatic. But in Brazil the development has gone the other way, and catchers are now professionals who – at least in the case of the company Victor and his colleagues work with – have a proper work contract and are trained in how to perform their task. And as you can see from the poster, they know and have a lot to say about the welfare of broilers on the farm and during catching. Whether it’s better for a chicken to be caught by a machine or by a professional handler has not been studied, but it seems quite obvious that professional handlers with this kind of insight makes for better animal welfare than unprepared occasional workers!

The next photo shows Marina von Keyserlingk from British Columbia, Canada presenting work by Jane Stojkov on whether dairy cows sent for auction are actually fit for transport. (The answer is that far too many of them aren’t). This question surprised me, as the only auctions for dairy cows I have experienced are those where a farmer sells their surplus heifers to a farmer who is expanding or improving their herd. But the auction pictured on the photo is one for culled dairy cows intended for slaughter, because that is the route between the dairy farm and the slaughter house in Canada today. And since many cows are culled because of health issues, it is a real problem for animal welfare that these cows need to go through an extra round of transport, housing and showing before they are slaughtered. 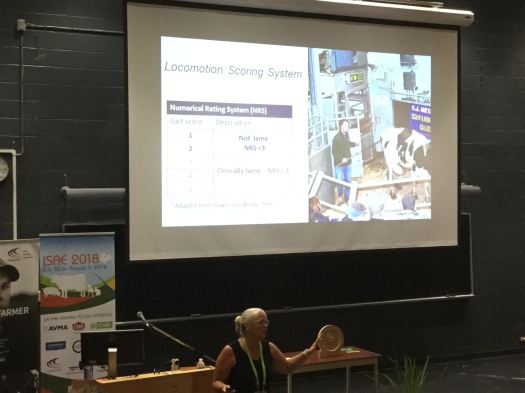 One Reply to “Cultural differences of ethological relevance”